You may be able to retire earlier than you think if you factor in how much social security or pension income you will receive in the future. 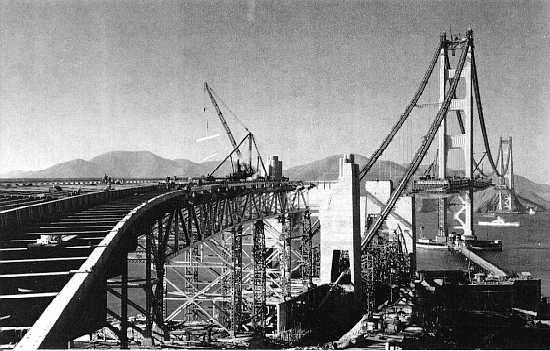 If you read any early retirement blogs, you may have encountered a rule of thumb that says something like “you need to save 25 times your annual expenses in order to retire”. That 25 number, the expense multiplier, comes from a 4% withdrawal assumption. So if you withdraw 4% from your portfolio to cover your expenses, that means your portfolio must be at least as big as the inverse of 4% or 25. Because you only retire once, I prefer to be a little more conservative and use an expense multiplier of 30 which corresponds to a 3.33% withdrawal rate.

While this kind of rule is a great rule of thumb for giving people an idea of how much money they will need to save, it tends to ignore the income that you will earn from a future income stream such as social security or a pension1. In the early retirement circles the effects of social security tend to be ignored perhaps because it seems like far-off and insignificant event. But the effects of that extra income increase over time so your financial independence could be closer than you previously thought.

To illustrate the effects with an extreme example, consider the case of somebody named Woodrow who is 69 years old and has expenses of $40,000/year. Furthermore, if Woodrow expects to receive $40,000/year from social security at age 702, then he will only need to have savings of $40,000 to be able to retire right now. In this extreme example, Woodrow’s expense multiplier is 1 because he only needs to have saved 1 times his annual expenses in order to retire now. Think of needed savings as a 1-year bridge that allow Woodrow to live comfortably until his full social security benefits kick in. 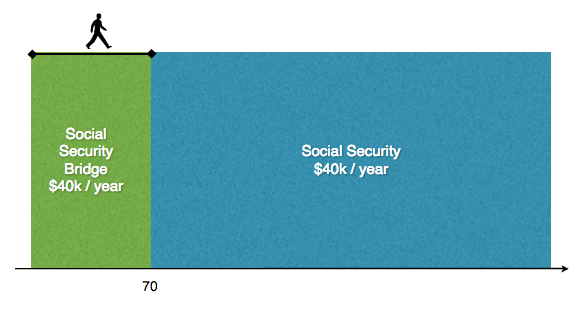 In the illustration above, the green area represents the funds that are needed to fill the gap until social security kicks in.

Also of note, if Woodrow is 30 or more years from receiving social security, he doesn’t necessarily need a portfolio bigger than 30 times his expenses because, theoretically he should be able to live off of the 3.33% withdrawal indefinitely (or whatever you consider to be a safe withdrawal rate).

The above example is interesting and illustrates how accounting for social security can dramatically reduce a person’s expense multiplier. But early retirees are more likely to be in a situation where the social security amount will not cover all of their expenses in the future because they may not have contributed a full 35 years into the system. In this case, a social security bridge may need to be supplemented by additional withdrawals to meet spending needs.

Let’s consider another person named Priscilla who is aged 55 and estimates that she will receive $30k/year (in today’s dollars) from social security if she waits until age 70. But Priscilla’s expenses are $40k/year. To bridge the 15-year social security gap, Priscilla needs 15 times the $30k, or $450k to get her to the level of income that social security will provide. Then she will need an additional piece of her portfolio to get her the extra $10k/year needed to cover her expenses. Using a 3.33% withdrawal rate means Priscilla will need an additional 30*$10k or $300k.

In Priscilla’s example she would need $750k to retire at age 55 with $40k in expenses. This means that her expense multiplier is reduced from 30 (inverse of 3.33%) to 750k/40k or 18.75. To put it another way, without considering social security Priscilla might have concluded that she needed to save 30*40k or $1.2m, which is 60% more than the $750k she actually needs when taking social security into account. 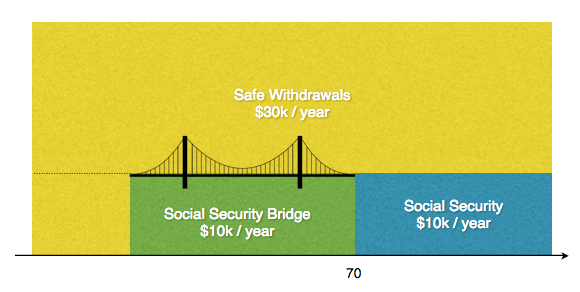 How do you build a social security bridge? The trick is to allocate a chunk of money that will pay you an income equal to what you expect to receive from social security in the future. Fortunately, the social security administration reports your expected benefits in today’s dollars and adjusts them up every year based on current inflation. This makes it easier to project how much money you need now because the calculations are done in current dollars.

There are several ways you could build a bridge fund.

Now is the time for the geeky part of the article. Let’s try to develop an equation to describe the effective expense multiplier that takes future social security income into account.

The equation for your future income can be written as,

The 2nd term of the above equation represents an approximation of how much your portfolio will be reduced by building your social security bridge. This will vary depending on how you build that bridge but this is a good ballpark estimate.

Plugging all those equations in and solving for multiplier_effective gives:

Notice that the closer you are to collecting social security, the smaller your effective expense multiplier is. So each year you do this calculation will bring you closer to retirement even if your portfolio doesn’t grow. The amount you will reduce your effective expense multiplier each year is the ratio of your social security income to your total needed income.

Let’s try applying this equation to Woodrow’s example where he will retire in 1 years:

Which is exactly as we expect. In fact, in cases like Woodrow’s, where the income from social security equals (or exceeds) the total income needed, then the equation for the effective expense multiplier reduces to:

Priscilla’s effective withdrawal rate in the first year would be approximately 1/18.75 or 5.33%. You may be thinking that a withdrawal of 5.33% is too high but remember, she is still withdrawing a conservative 3.33% on the funds outside of the bridge fund.

Some people would have you believe that social security will be greatly diminished in the future. Whether or not that’s true, time will tell. If you are worried about this possibility then simply adjust downward your social security estimate in the above equations to a level you feel comfortable with4.

The inverse of the withdrawal rate is often used as an expense multiplier to figure out how big a person’s portfolio needs to be to cover retirement expenses. Oftentimes this is stated in terms of how big a portfolio needs to be in order to cover expenses above social security income. It’s common for early retirees to assume that this expense multiplier also applies to their total income but it doesn’t account for future income streams like social security.